is always better than treatment 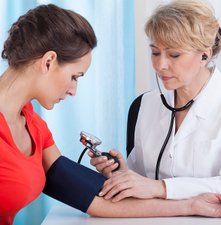 - the World Health Organization has identified hypertension, or high blood pressure, as the leading cause of cardiovascular mortality

The World Health Organization has identified hypertension, or high blood pressure, as the leading cause of cardiovascular mortality. The World Hypertension League (WHL), an umbrella organization of 85 national hypertension societies and leagues, recognized that more than 50% of the hypertensive population worldwide are unaware of their condition.

As the momentum picks up year after year, the WHL is confident that almost all the estimated 1.5 billion people affected by elevated blood pressure can be reached.

Hypertension is rarely accompanied by symptoms, and its identification is usually through screening, or when seeking healthcare for an unrelated problem. Some people with high blood pressure report headaches (particularly at the back of the head and in the morning), as well as lightheadedness, vertigo, tinnitus (buzzing or hissing in the ears), altered vision or fainting episodes. These symptoms, however, might be related to associated anxiety rather than the high blood pressure itself.

Blood pressure rises with aging and the risk of becoming hypertensive in later life is significant. Several environmental factors influence blood pressure. High salt intake raises the blood pressure in salt sensitive individuals; lack of exercise, central obesity can play a role in individual cases. The possible roles of other factors such as caffeine consumption, and vitamin D deficiency are less clear. Insulin resistance, which is common in obesity and is a component of syndrome X (or the metabolic syndrome), also contributes to hypertension. One review suggests that sugar may play an important role in hypertension and salt is just an innocent bystander.

Events in early life, such as low birth weight, maternal smoking, and lack of breastfeeding may be risk factors for adult essential hypertension, although the mechanisms linking these exposures to adult hypertension remain unclear. An increased rate of high blood uric acid has been found in untreated people with hypertension in comparison with people with normal blood pressure, although it is uncertain whether the former plays a causal role or is subsidiary to poor kidney function. Average blood pressure may be higher in the winter than in the summer. Periodontal disease is also associated with high blood pressure.

Once the diagnosis of hypertension has been made, healthcare providers should attempt to identify the underlying cause based on risk factors and other symptoms, if present. Secondary hypertension is more common in preadolescent children, with most cases caused by kidney disease. Primary or essential hypertension is more common in adolescents and adults and has multiple risk factors, including obesity and a family history of hypertension. Laboratory tests can also be performed to identify possible causes of secondary hypertension, and to determine whether hypertension has caused damage to the heart, eyes, and kidneys. Additional tests for diabetes and high cholesterol levels are usually performed because these conditions are additional risk factors for the development of heart disease and may require treatment.

Initial assessment of the hypertensive people should include a complete history and physical examination. Serum creatinine is measured to assess for the presence of kidney disease, which can be either the cause or the result of hypertension. Serum creatinine alone may overestimate glomerular filtration rate and recent guidelines advocate the use of predictive equations such as the Modification of Diet in Renal Disease (MDRD) formula to estimate glomerular filtration rate (eGFR). eGFR can also provide a baseline measurement of kidney function that can be used to monitor for side effects of certain anti-hypertensive drugs on kidney function. Additionally, testing of urine samples for protein is used as a secondary indicator of kidney disease. Electrocardiogram (EKG/ECG) testing is done to check for evidence that the heart is under strain from high blood pressure. It may also show whether there is thickening of the heart muscle (left ventricular hypertrophy) or whether the heart has experienced a prior minor disturbance such as a silent heart attack. A chest X-ray or an echocardiogram may also be performed to look for signs of heart enlargement or damage to the heart.

Much of the disease burden of high blood pressure is experienced by people who are not labeled as hypertensive. Consequently, population strategies are required to reduce the consequences of high blood pressure and reduce the need for antihypertensive medications. Lifestyle changes are recommended to lower blood pressure, before starting medications. The 2004 British Hypertension Society guidelines proposed lifestyle changes consistent with those outlined by the US National High BP Education Program in 2002 for the primary prevention of hypertension:

Effective lifestyle modification may lower blood pressure as much as an individual antihypertensive medication. Combinations of two or more lifestyle modifications can achieve even better results. There is considerable evidence that reducing dietary salt intake lowers blood pressure, but whether this translates into a reduction in mortality and cardiovascular disease remains uncertain. Estimated sodium intake ≥6g/day and <3g/day are both associated with high risk of death or major cardiovascular disease, but the association between high sodium intake and adverse outcomes is only observed in people with hypertension. Consequently, in the absence of results from randomized controlled trials, the wisdom of reducing levels of dietary salt intake below 3g/day has been questioned. ESC guidelines mention periodontitis is associated with poor cardiovascular health status.

According to one review published in 2003, reduction of the blood pressure by 5 mmHg can decrease the risk of stroke by 34%, of ischemic heart disease by 21%, and reduce the likelihood of dementia, heart failure, and mortality from cardiovascular disease.

Various expert groups have produced guidelines regarding how low the blood pressure target should be when a person is treated for hypertension. These groups recommend a target below the range 140–160 / 90–100 mmHg for the general population. Cochrane reviews recommend similar targets for subgroups such as people with diabetes and people with prior cardiovascular disease.

Many expert groups recommend a slightly higher target of 150/90 mmHg for those over somewhere between 60 and 80 years of age. The JNC-8 and American College of Physicians recommend the target of 150/90 mmHg for those over 60 years of age, but some experts within these groups disagree with this recommendation. Some expert groups have also recommended slightly lower targets in those with diabetes or chronic kidney disease with protein loss in the urine, but others recommend the same target as for the general population. The issue of what is the best target and whether targets should differ for high risk individuals is unresolved, although some experts propose more intensive blood pressure lowering than advocated in some guidelines.

The first line of treatment for hypertension is lifestyle changes, including dietary changes, physical exercise, and weight loss. Though these have all been recommended in scientific advisories, a Cochrane systematic review found no evidence for effects of weight loss diets on death, long-term complications or adverse events in persons with hypertension. The review did find a decrease in blood pressure. Their potential effectiveness is similar to and at times exceeds a single medication. If hypertension is high enough to justify immediate use of medications, lifestyle changes are still recommended in conjunction with medication.

Increasing dietary potassium has a potential benefit for lowering the risk of hypertension. The 2015 Dietary Guidelines Advisory Committee (DGAC) stated that potassium is one of the shortfall nutrients which is under-consumed in the United States. However, people who take certain antihypertensive medications (such as ACE-inhibitors or ARBs) should not take potassium supplements or potassium-enriched salts due to the risk of high levels of potassium.

Stress reduction techniques such as biofeedback or transcendental meditation may be considered as an add-on to other treatments to reduce hypertension, but do not have evidence for preventing cardiovascular disease on their own. Self-monitoring and appointment reminders might support the use of other strategies to improve blood pressure control, but need further evaluation.

Several classes of medications, collectively referred to as antihypertensive medications, are available for treating hypertension.

First-line medications for hypertension include thiazide-diuretics, calcium channel blockers, angiotensin converting enzyme inhibitors (ACE inhibitors), and angiotensin receptor blockers (ARBs). These medications may be used alone or in combination (ACE inhibitors and ARBs are not recommended for use in combination); the latter option may serve to minimize counter-regulatory mechanisms that act to restore blood pressure values to pre-treatment levels. Most people require more than one medication to control their hypertension. Medications for blood pressure control should be implemented by a stepped care approach when target levels are not reached.

Previously beta-blockers such as atenolol were thought to have similar beneficial effects when used as first-line therapy for hypertension. However, a Cochrane review that included 13 trials found that the effects of beta-blockers are inferior to that of other antihypertensive medications in preventing cardiovascular disease.

Send us an email: ostar@cnd-tech.de